The 2014 Surrey Vaisakhi Parade, which took place Saturday, April 19, provided yet another example of the family friendly activities that are available to people living in the Fleetwood and Guildford areas. Millions of Sikhs around the globe celebrate Vaisakhi Day every April in order to kick off the New Year, and the event in Surrey welcomed attendees from any and every culture. This year’s event, which kicked off at the Gurdwara Dashmesh Darbar Temple, happened to be one of the biggest such event outside of India. Many people who either have or are looking to invest in local real estate in the area turned up to celebrate an occasion that marks what considered one of the top festivals in the Sikh tradition. Here are some of the highlights that residents enjoyed at this year’s parade. 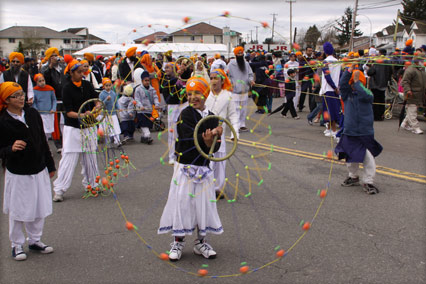 As it turned out, the 2014 edition of the parade was the best attended ever with north of 240,000 people who represented various religions and nationalities. Regarded as one of Western Canada’s biggest family events, the Surrey Vaisakhi Parade provided an opportunity for the community to celebrate with Sikhs living in the province.

People who attended this year’s event were treated with a visually stimulating history of Sikh culture, faith, politics and social life courtesy of 20 floats. The floats, an integral part of the parade, were well received by attendees.

Singers covering traditional Sikh hymns kicked things off on the main stage late in the morning. Also part of the festivities was a ceremony that recognized the efforts of community volunteers whose tireless efforts have benefited Surrey. There was also a segment for speakers to address the attendees.

Free Food for All

One of the most anticipated aspects of the annual parade is the free food that is available to attendees. Attendees at this year’s event sampled authentic Sikh cuisine while enjoying the festivities.

The parade festivities also included collecting food on behalf of the Surrey Food Bank. In line with a tradition connected to the parade, people who lined the route of the parade were encouraged to donate non-perishable consumables. In a news release that came out just before the event, Moninder Singh, the spokesperson for the event organizer said: “The giving of food is at the heart of Khalsa celebrations. Thousands of Sikh families and businesses celebrate this important day by giving away food along the parade route. This year we are asking the community, local businesses and attendees to the parade to instead consider bringing non-perishable food for the Surrey Food Bank.”

The 2014 Surrey Vaisakhi Parade provided a family friendly event that people in the Fleetwood and Guildford areas could attend. Attendees were enthusiastic about the sights, sounds and tastes of the annual event. While there was precipitation, neither those who attended the festivities nor those who were involved allowed the weather to “rain on their parade.” For more information on the local real estate market, to schedule a home evaluation, or to sign up for our newsletter, please visit our website and we’ll be happy to help out in any way we can.