The city of Surrey has dedicated a great deal of public space to art installations that beautify and enliven the region. Dozens of works have been carefully placed in and around public buildings and infrastructure such as bridges and SkyTrain rails. These pieces include murals made of tile, metalwork and aesthetically pleasing lighting fixtures that highlight the landscape. Here are some public art pieces around Fleetwood and Surrey that are not to be missed by any art lover. 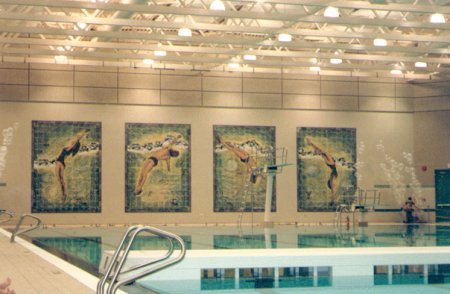 The Surrey Sport and Leisure Complex, located at 16555 Fraser Highway, boasts a pair of public art installations by Blake Williams, a Vancouver-based artist who specializes in public pieces. “A Million Summers” and “From Frozen Pond” are constructed with tiles and thematically linked via athletics and phases of water. “A Million Summers” features four culturally-diverse figures diving while From Frozen Ponds is a celebration of the region’s love of ice sports.

One of Guildford’s most conspicuous public art installations is located on Highway #1 at 168th Street. Seasons in the Park was created by John Webber, an award-winning theatre lighting and set designer. Drawing inspiration from the smooth curves and lines of the Tynehead Overpass, the artist has set up blue and green illumination across the bridge, creating a terrific sense of atmosphere for pedestrians and cyclists alike. Another fun installation is Maurice Van Der Beke’s “Growth,” which is a shell-shaped piece made of sheet copper pounded into a thin, square rectangular frame. This piece is intended to invite the viewer to interact by banging the art like a drum.

North of 148th Street over Highway 99, South Surrey is lit up by “Connections,” a light-based public art installation that colours the bridge that connects two neighbourhoods otherwise separated by the highway. Designed by Doug Welch, the installation intends to create a metaphorical link between sky and Earth while LED lights shift slowly from green to blue, simultaneously disconnecting the piece from the surrounding landscape.

Another illuminating piece of public art is located on King George Boulevard at Peterson Hill. Entitled “Lightmodal,” the installation consists of a series of lit strands that cast light on the Peterson Hill approach to the City Centre. This was created as part of Metro Vancouver’s Necklace Project.

Another place to find public art in Surrey City Centre is under the pillars of the SkyTrain. “Underfoot Yet Overhead” is a two-part installation. Part One runs along University Drive, forming a stop-motion animation expressed through a series of metal panels. Part Two is located at the City Centre Walking Loop Greenway around Holland Park. This series of metal panels expresses the way bacteria and other microscopic organisms multiply, paying tribute to the unseen yet vital functions performed by biological forces invisible to the naked eye.

Exploring the many public art installations within the Surrey area reveals the dedication and skill of the artists recruited to grace the landscape with their work. The city announced a five-year public art plan in 2012 with the aim of maintaining and developing public art within civic and private collections. To keep in touch with these and other neighbourhood developments that could affect the future of local real estate, sign up for our newsletter.